There were gender differences in aggregate personnel data, especially e.g. that the most senior scientific titles are mainly held by men and less by women, likewise citations of articles, etc. So it appeared that gender provided a glass ceiling. We wanted to determine why this was happening.

We were interested in finding out what employees at NIC think about working conditions, returning to work after long absences, gender balance of groups at different decision-making levels and involvement in research, whether they know who is responsible for the protection against bullying, and whether they think cases of sexual harassment and gender discrimination occur in the workplace.

Human resource department for preparing questions and designing a questionnaire and outside contractor for the preparation of reports and objective presentation of results.

The survey results showed that females and males responded quite similarly with interesting differences in terms of how men/women perceived support in the workplace after long absence; working conditions and gender balance in decision making groups.

Researchers/professors and technical and administrative staff

More detailed information about this action

The survey was active for about 2 weeks. In the meantime, 3 reminders or additional invitations to fill the survey were sent. We think this was crucial, so that more than 2/3 of NIC employees responded to the poll. The duration, on the one hand, was long enough to catch those who were absent, and short enough to encourage employees to respond to the survey promptly due to time constraints. The survey was launched in the last days of August 2019 and ended in the second week of September. We estimate this was the most appropriate time as employees returned from vacation, with September marking a new school year, a fresh start, and coinciding with the timing of the survey permissions.

We included questions about gender equality issues in internal questionnaires as below.

The survey was online and could be completed via PCs, mobile phones and tablets. One problem, however, could be highlighted. The employee satisfaction survey was quite extensive and complex – it had almost 100 variables. From the analysis of the entire survey, it was observed that the number of correspondents on each set of question was linearly decreasing. The set of questions about gender issues was positioned somewhere after half of the questions, so the number of units is smaller than in the first sets. In the open-ended questions, respondents commented that these questions pertained to NIC, while others were more related to specific departments. 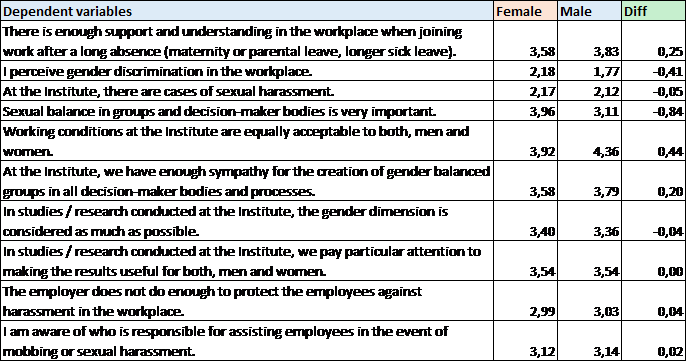 From the data presented, we can conclude that for 5 dependent variables, females and males responded quite similarly – the difference is minimal (<0.05). It is interesting to note that men are slightly more likely than women to believe that, after a long absence, there is sufficient support and understanding in the workplace (difference 0.25), that working conditions at the institute are equally acceptable for men and women (difference 0.44) and that we have sympathy for creation of gender balanced groups in all decision-making bodies and processes (difference 0.2). It is interesting to note that for women, the gender balance of groups and decision-making bodies is far more important than for men (this is the biggest difference 0.84). At work, women perceive gender discrimination slightly more than men (0.41 difference).

IP Restrictions – prevention of Multiple Fill Outs, elimination of unsuitable units (units that completed only part of the survey, e.g. one set).

Gender mainstreaming has been incorporated into one of the sections in the Employee Satisfaction Survey. In doing so, it can be argued that we received significantly more correspondents than we would have if we had done two surveys separately.

Reflection: what we would do differently

The response was greater to the gender questions by including them in the overall employee satisfaction survey. The last survey was conducted in 2014, and in the meantime, there had been a lot of unexpected change. It seems necessary for us to conduct a survey on a longitudinal basis at least every two years, following exactly the same procedure and the same questions, as this is the only way we can obtain comparable results and measure the impact of the implemented measures in a particular area. At the moment, we can say that the cross section was complex but successfully started.

We need to boost employees’ confidence to talk openly about problems and reassure them that they can express their opinions openly without any consequences, as only this can help us identify the areas that need improvement.